About a 18 months ago fellow Strength and Conditioning Coach, Nick Ward, introduced me to the work of Joan Vickers.  Joan Vickers is a scientist who has been conducting research in gaze control and motor behavior in sport from more than 30 years. Joan has developed a system of coaching in sport that brings the science of how we think, or cognition, to the fore in sport preparation.

Vickers has applied her decision training model successfully to a wide range of sports, including table tennis, baseball, basketball, badminton, freestyle ski jumping, golf, swimming, biathlon skiing, cycling and speed skating. I think that the decision training model links closely to the concept of CHAOS training that I covered recently and if used in conjunction with each other, has the potential to produce intelligent athletes capable of making match winning decisions in an instant.

Are You A Decision Trainer?

Self Questionnaire: Are You Already a Decision Trainer?

For each question, circle T for true or F for false.

1. It is important to master the fundamental or basic skills of a sport or activity before more complex skills or tactics are introduced. T / F

2. A lot of feedback to every athlete is required in every practice. More feedback is always better. T / F

3. Athletes do not need to be experts at analyzing their own performance -that s the coaches or therapists job. T / F

4. Technical and physical skills should be masterd before decision making skills are introduced. T / F

6. It is critical that the same skills be practiced over and over until perfection is reached; being able to perform without thought is the ideal. T / F

7. Using a questioning style where you ask your athletes to think about their movements and suggest improvements is too time consuming and detracts from training. T / F

Key to scoring: Add the number of false (F) statements.

1. If you answered false to 7 or more questions, you are using a lot of decision training methods.

2. If you answered false to 5 or more questions, you are using some decision training methods.

3. If you answered false to 3 or more questions, you are using few decision training methods

How did you score? Joan Vickers argues that the traditional 'behavioural' model of blocked repetitive practice falls well short of preparing athletes to face the demands of the sporting arena. During blocked training, specific components and skills are isolated and repetitively practiced until perfect. Lots of feedback and specific guidance is offered throughout the learning process. Success is often immediate, and this type of training is therefore appealing to many coaches and athletes. The problems with this form of coaching begin when we start to look at long-term improvements, particularly when athletes are faced with challenging conditions (Fig 1). How many times have you seen a highly skilled player that just can't reproduce performances under pressure?

Figure 1: Overview of motor learning research showing the paradoxical reversal in long-term performance that occurs when behavioural training and decision training are used.

We can see in figure 1 that long term performance declines, especially when difficult and stressful conditions are encountered. The opposite is true for the athletes using decision training. Although their performance may initially be slow, long-term improvements can potentially outstrip those using a more traditional coaching approach.

It is important to note 'blocked' practice (practicing the same skill over and over again with little change) still has its place, it's just not the only type of practice used. Figure 2 provides an overview of the two coaching styles. 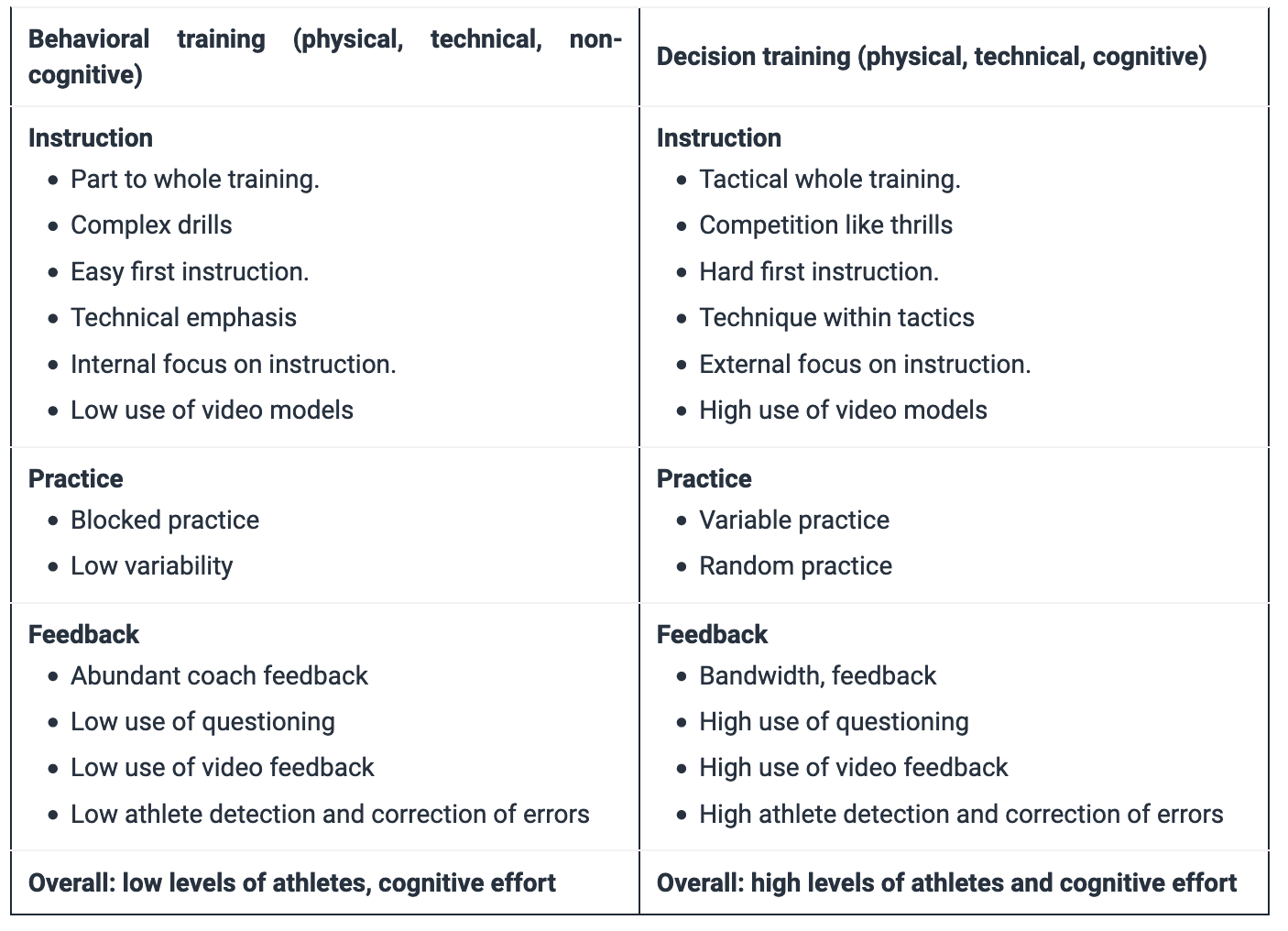 Joan Vickers feels that we can coach our athletes to make tough decisions; it shouldn't simply be left to chance. In her book, Perception, Cognition, and Decision Training: The Quiet Eye in Action, she covers the intricacies of decision training in sport over four chapters, it's well worth taking the time to read in full but I'll give you a whistle stop guide to the key points. 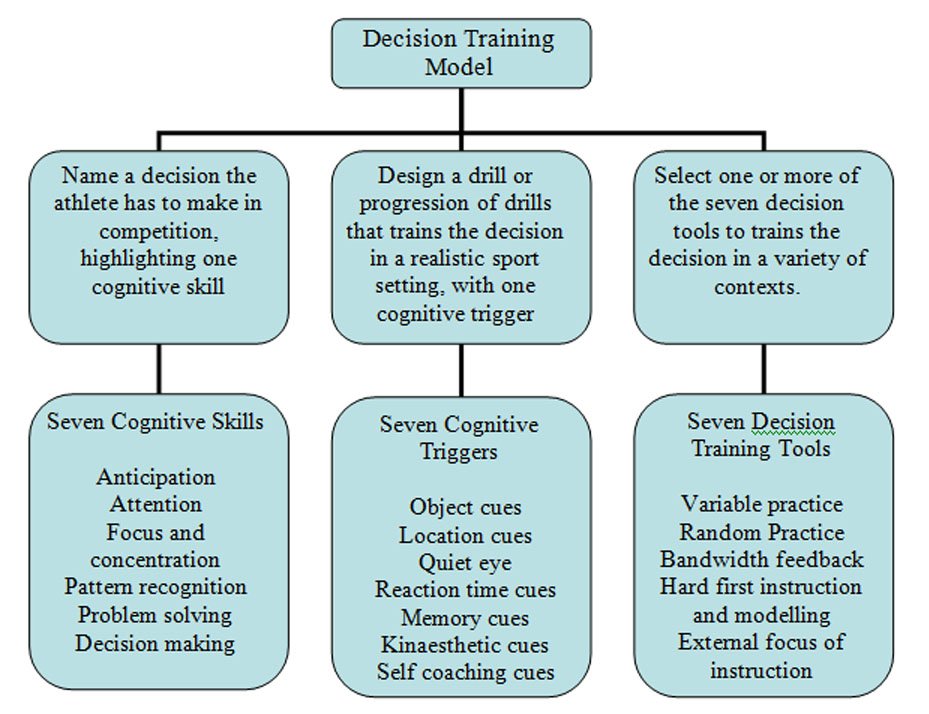 To give you an understanding of how to apply the decision training model I'm going to use the example of a football player that needs to work on their ability to track the ball effectively.

The first step is to identify the decision(s) that need to be made in a competitive environment. In this case, the cognitive skill to be developed is attention (tracking the ball). Step two requires the coach to then design a drill with a cognitive cue to train the decision identified in step one. A cognitive trigger allows both the coach and athlete to know if the correct decision has been made whilst performing the skill or tactic. To improve a football player's attention an object cue will be used as the cognitive trigger, to see if the player can track the ball effectively.  The player will be asked to call out numbers or letters written on the ball before receiving a pass and taking a shot on goal. In step three, one or more of the seven decision training tools are used to train the decision highlighted in step one within the context of step two. In this example, the training session will be a random practice using smart combinations (the drills simulates conditions are similar to those found during a match) a combination of receiving a pass and taking the shot.

How a coach delivers feedback can have a significant impact on how well the athlete learns and performs. We have already seen in figure 2 that a behavioural approach favours immediate feedback, with little two-way interaction between the coach and athlete.

In the decision training model, several methods can be used to provide feedback. Using the example of our football player, we will use what Vickers calls 'bandwidth' feedback. Bandwidth feedback, gradually reduces and delays, the amount of feedback as skill level increases. When the task is first being learnt, high levels of feedback are important, but over time the coach starts to fade feedback as performance improves.

When using this approach, the athlete has the chance to function in a more independent manner and research has shown that when the amount of technical feedback is reduced the ability to maintain form improves under pressure.

All too often I hear lots of 'noise' and not much coaching taking place! Sometimes a coach will find it difficult to sit back and not say anything, so they fill the void with empty statements like "faster", "great job", "more" etc! Silence is golden, but if you struggle with it then another technique that can complement bandwidth feedback is the use of questioning. Questioning is a strategy that I find extremely useful when working with athletes. It allows me to establish how well the athlete understands the skills being taught.

Coaching and learning go hand in hand and those who are the best coaches have several tricks up their sleeve to assess and monitor learning. It is easy to fall into the trap of producing athletes and players who are great at set plays and running 'patterns' and 'drills' but who can't actually deliver where it counts, in competition under pressure.  Decision training is one way of developing intelligent athletes that can cut it in the chaotic sporting environment.